On my first day of work at a recent job, my Wife had an indoor money tree delivered to my office.  To me, it was a symbol of a new beginning — a new chapter in life.  The tree itself is a Malabar chestnut (Pachira acquatica), and many people believe that it will bring good luck, fortune and prosperity.  Typically, the tree has five trunks that are braided together, and the size of the tree will generally depend on its age and the size of its pot.  If taken care of properly, the tree will often sprout new stems of leaves that unfold into five leave stems. 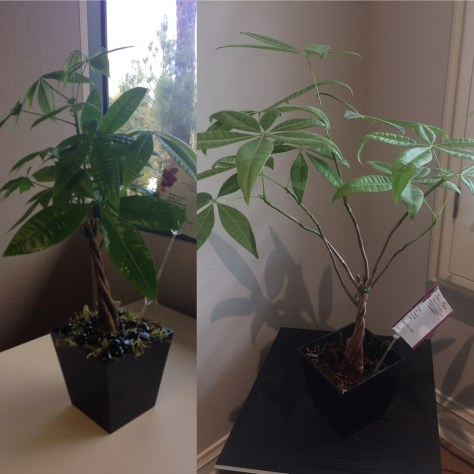 This tree is important to me and He is very temperamental.  I once put Him outside in the sun for an hour, thinking He would enjoy some sunlight.  When I revisited the tree, I realized each of His leaves that were directly exposed to the sun were burnt to the crisp.  He didn’t like the sun.  I felt so guilty – I know exactly how He felt — the same way I feel after laying out for an hour without sunblock.  It took a week for all of His leaves to fall off, only to sprout new ones over the next month.

We fumigated our house for termites one weekend and left all of our indoor plants with a neighbor.  When we picked Him up a week later, he had clearly been over-watered and was unhappy, by the look of His droopy leaves.

We’ve grown older together.  I now know He only likes indirect light and prefers to drink once a week.  Other than that, we pretty much leave Him alone.  I don’t bother Him and He doesn’t bother me.  But I am thankful for His presence.

Ever been on the wrong side of an argument?  Well if you’re like most people, the answer is yes.  Don’t get upset or emotional as it will only make matters worse. Identify the weakness or gap in your argument and figure out how to make it better so you’ll end up on the right side next time!  Losing is tough and is never fun, but when you do lose, try to spin a positive out of it.  If you do that, then you haven’t really lost because you’ve just learned from your mistake.

The San Francisco 49ers have had a busy off season.  After finishing 2-14 (with their only 2 wins coming against the LA Rams), the 49ers fired head coach Chip Kelly after only one season.  They also fired General Manager Trent Baalke.  A tumultuous season indeed, especially after watching then-backup QB Colin Kaepernick sit during the national anthem, motivated by alleged oppression against black people and other non-white races.  Because of their terrible record, the 49ers secured themselves the #2 pick in the draft.  It remains to be seen if they will select a QB or not (i.e. Mitch Trubisky*, QB, North Carolina; or Deshaun Watson*, QB, Clemson).  The 49ers also poached the offensive coordinator, Kyle Shanahan, from the Atlanta Falcons and made him the 4th new head coach for the Niners in the last 4 years!  At the same time, they also hired new General Manager, John Lynch.

Following are some of the key pickups so far this free agent offseason: