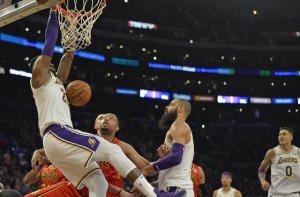 Predicated by a season-high 44 points from LeBron James, five Los Angeles Lakers went on to score double-figures in a win over the Portland Trail Blazers. This is the team’s fourth straight win. In the previous two games, five players also scored at least 10 points against the Atlanta Hawks. Six were actually in double-figures when they beat the Sacramento Kings.

This has been a regular occurrence — something Lakers head coach Luke Walton is very happy about. He says it’s a goal that he wants them all to aspire to every time they play. Read more here: